It's not often we get any meaningful level of representation in the media.

This brings back memories...

Your childhood days are your formative days. Things can happen that have a lasting impact. Sometimes it is the dislike of a certain food that you had, to something as wanting to hide away from the rest of the world.

This BBC piece about being a takeaway child brings back memories of when my parents had a restaurant and takeaways. Poignant memories in the main. There's the added context of being able to count the number of other non-white families in the town on one hand as well.

Whilst the BBC has done similar programming, the representation of the British Born Chinese is pretty minimal at times, barring some wok based cooking show and the odd walk on part in Eastenders. Probably the equivalent of M squared in "BAME". Your forced-upon role models was either Monkey or David Yip, the Chinese Detective. That's the 80's playground for you.

I will certainly concede that we were our own worst enemy. Hard working, inscrutable, excellent at education… our self fulfilling prophecy. Yes, our parents landed in a strange and barely welcoming country at times. There have been good people but as usual the noise of the troublemakers are loudest. We thought getting our heads down into hard work, we would get through it.

Our parents gave us that platform, but we didn't know what to. I still see the same questioning from the next generation in the Facebook groups I am part of.

What I have gained, through getting older, is respect for the sheer sacrifice and perseverance our parents went through. I've learnt to offer the best piece of lobster to your guests before you tuck in. If you know my love of food, that takes some doing, but it's the right thing to do. 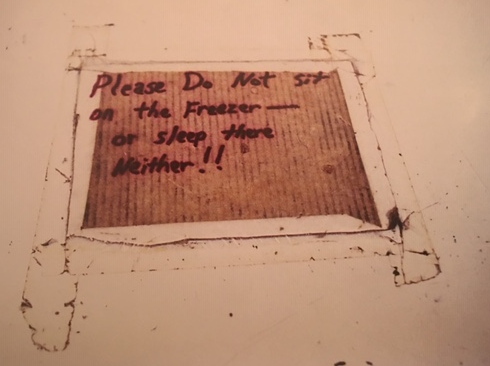 This picture made me laugh. I was that child that slept on the chest freezer lid at the back of the restaurant. No number of blankets made it any easier.

It's nice to see that some people on Facebook also have fond memories of our restaurant in the 1970's and 80's, as I saw a post where someone was asking about its existence.