Poole Ferry gets struck
Was out jogging near Hengistbury head around 10pm but suddenly thought I should go home when I saw the number of lightening strikes increase. It seemed like Swange to Poole area was getting hit quite bad.
Click to check the
BBC Photos of Dorset Lightening

Coby
Graham gets awarded his Masters Degree in America.

Don't know what it is for, some computing stuff probably....!

Parents were across also for that and to see his new son, Coby. Here he is with his cute hair and chubby cheeks.
Click on the next link to get Graham's Degree Photos.

Scorchio! I almost melted away this weekend, especially having my first meal in a Vietnamese restaurant in Shoreditch, London.
Very authentic all round, especially the near 40 degree temperature inside.... and Angela wonders why the prospect of going to Vietnam for a month is not high on my list. Mentally I would love to go, physically I would end up a complete sweaty mess. Not a nice look.

I thought hmmm, tele2 could save me money on my phone bill but I get the feeling of why bother. I signed up via the net, so how the hell could they get my name and address wrong? Mrs Gina Fong - err not quite. How could they get it so wrong!
They even asked me for a password when I called their customer server, at the third attempt having been cut off a couple of times. I can't remember setting a password nor would I have set it to the one they said it was.
I'll give it till the end of the year...
British Telecom were absolutely great in comparison whenever I have called previously.

Stuart and Emma
Congratulations to the Bride and Groom. The sun came out for the wedding and it was a fantastic day. The Veuve flowed freely all day. The church and Prestwold Hall were fine settings for the occassion.
Must apologise for not filming the first dance. The champagne had got to my head by then and I couldn't read the display any more and my brain had turned to jelly. I thought it was recording..... d'oh!
I also missed out on all the cheese. I kept on asking everybody about where it was coming from but just couldn't take in all the answers. 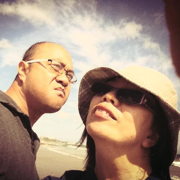